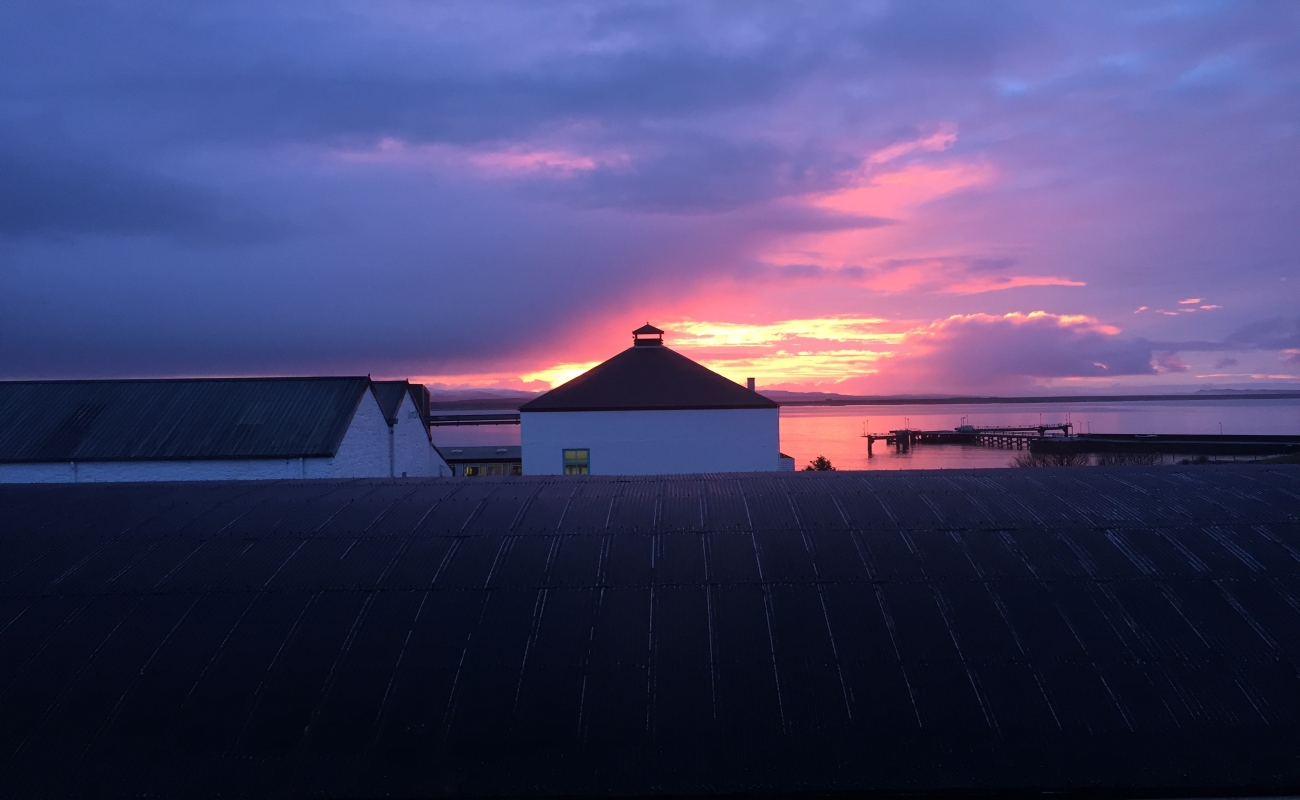 This short two day trip as a guest of the Bruichladdich Academy was not only my first time to this distillery, but my first to Islay; arriving at night on the Kennacraig ferry there’s not much to see, but in the morning I was greeted with the most vivid sunrise, like the island knew it had first timers it had to impress. Henceforth, the weather was as changeable as you could imagine throughout the short trip – we were told ‘It never snows on Islay’ but we had at least four snow flurries on day 1. So much for breaking me in gently.

Before we were given a distillery tour we shown island to give us a sense of place and discover how strongly the whisky is connected to the local fauna and flora. Tasting Port Charlotte Local Barley next to the field which is the source of the barley is a truly enlightening experience and not one that will be forgotten soon. You can also see from the (despite low-light of January) colour of the sea where the distillery got their distinctive aqua-blue livery.

Bruichladdich has been through many changes over the last few decades. It was closed in 1994, but then given a new lease of life in 2001 under new ownership of former London wine merchants Mark Reynier and Simon Coughlin. Mark and Simon brought a new culture of excellence to the distillery, influenced greatly by the world of wine. Foremost, the notion of ‘terroir’: not really a term that is used widely in the world of whisky, but what they were trying to achieve, and very successfully, was to express a sense of the place in glass. Normally for Islay whisky, this would mean a great deal of smoky, peaty aromas in the glass, but they sought a different expression, and in keeping with Bruichladdich’s former incarnation, and still to this day, Bruichladdich is a totally unpeated whisky, with only Port Charlotte and Octomore (the two other brands produced at Bruichladdich) having the barley smoked with peat.

The distillery manages every stage of the production in Islay with the exception of the malting which is done on the mainland, but there is a five year plan to create a maltings floor at the distillery. As I write, Springbank is the only distillery in Scotland which malts all of its own barley, so this in itself is not unusual. Does this detract from the notion of terroir? Well that’s very difficult to answer, but it is the one remaining process which would complete the story. What I feel is more important is the origin of the barley. Not all of their requirement comes from Islay, as the Island just does not grow enough to fulfil their requirements, but there is a significant amount that does. There are currently 19 farms on Islay that supply the distillery, so there is much benefit to the local economy, and Islay really does feel like it is thriving. There are 80 people employed by Bruichladdich, by far the largest employer on the island, despite only producing about 1/3 as much as the larger, Diageo-owned distilleries. This is very much a hands-on operation with much of the machinery from the original foundation of the distillery still in operation. Don’t be fooled by the modernity of the packaging and the slickness of the marketing, this is a very traditionally made product with hardly a computer in sight.

The distillery has been owned by Remy Cointreau since 2012, and I am sure that there are naysayers who doubt the motivation of this rather large, French-owned spirit group. As far as I can see, there is very little deviation from Mark and Simon’s original vision. If anything, the volume of production has decreased, with Head Distiller Adam Hannet given all the free reign he would crave to craft some quite extraordinary spirits. A whistle stop tour of the warehouse reveals the sources of the barrels and for a wine man like me, this is hugely exciting. Not just all the barrels from the Bordeaux First Growths such as Mouton Rothschild, Latour and Yquem, and Burgundy & Rhone luminaries such as Louis Jadot and Chapoutier, but far flung corners of the wine world such as old Rivesaltes casks and ancient Sherry butts, and Amarone casks from Romano Dal Forno, to the new ‘virgin’ casks for ageing their yet-to-be-released Rye (apparently, the worst kept secret in Scotland – so I’m not really breaking any confidences).

I would have thought that my two-day trip to the distillery would enlighten me of the full range of whiskies produced here. How wrong was I? There is still a dizzying amount of different expressions, perhaps someday it will all become clear. Yet, I do have my favourites. It goes without saying that the standard bottlings of Classic Laddie and Port Charlotte 10 will remain classics in my stash at home, but I was hugely impressed with the 2008 Bere Barley and the Micro Provenance, single-cask Rivesaltes and Burgundy. These guys can hardly put a foot wrong. I think they hold some form of record for the amount of different expressions bottled by one distillery, but despite that you are in safe hands with Bruichladdich: they’re all good.

So, what else is there to mention? Oh, yes, I nearly forgot the Gin. The Botanist has been a huge success for them. So much so that they now sell, by volume, more Gin than Whisky. This would normally upset me, but it doesn’t: the product is great. Made from 22 herbs, flowers and plants foraged on the island, and distilled from wheat as it is more neutral than barley, to allow the expression of the botanicals more precisely. I drink it neat, but you can drink it however you want. G&T, Martini (as it is high proof at 46% it is especially good for Martinis), whatever you prefer. Nothing will beat it drinking it (naturally) cold on Machair Beach though, with the salty breeze mingling with the vapours.

Bye-bye Islay, I miss you already.